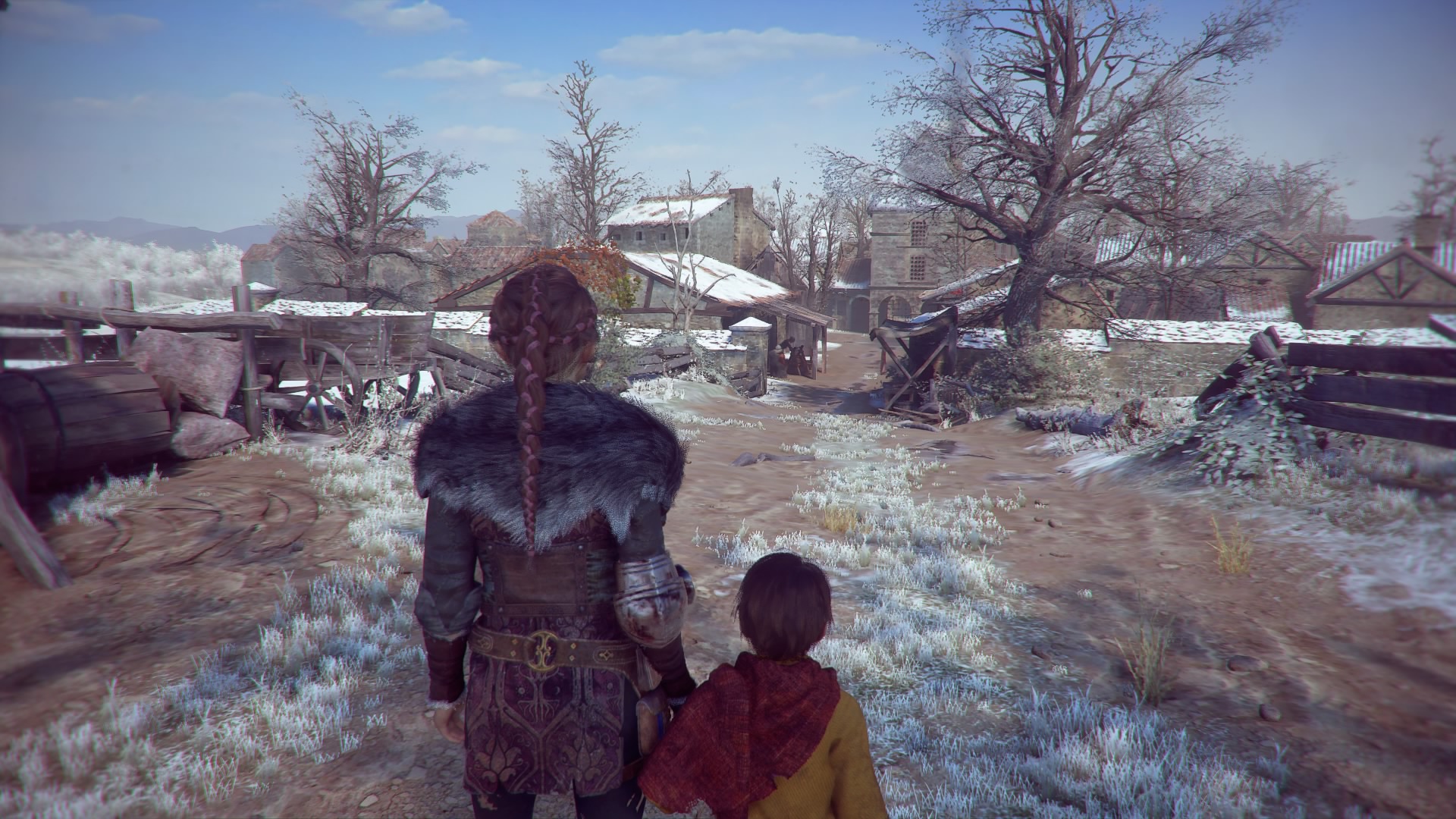 Development of the game is dated to 2017 when Focus Home Interactive firstly introduced it at E3. The game was first introduced as "The Plague" without "Innocence" predicate. Asobo Studio has done most of the work on The Plague Tale: Innocence and their previous experiences reach to 2008 when "The Fuel" was released with ranking 94 %. In the second half of the decade of the 21st century, Asobo Studio gets down to a completely different genre, and it is an action-adventure with stealth elements, titled A Plague Tale: Innocence.

A story of Amicia and Hugo slowly steps up from the beginning as such. In the beginning, they're trying to hunt wild animals, Amicia, her father and dog Lion. Lion gets a whiff and runs away to a gloomy part of the forest being followed by Amicia and her father. Both are subsequently witnesses of disappearing of Lion who is buried alive in appallingly looking hole which foretells nothing good.

Amicia de Rune and her father Robert de Rune speedily return to a castle to warn a mother, Beatrice de Rune, who has been taking care of the health of their son, Hugo. Hugo is seriously ill, and the mother hides Hugo from the eyes of other people. Amicia, certainly don't know Hugo, but circumstances made her look into the forbidden castle chambers where she has never been allowed to enter. 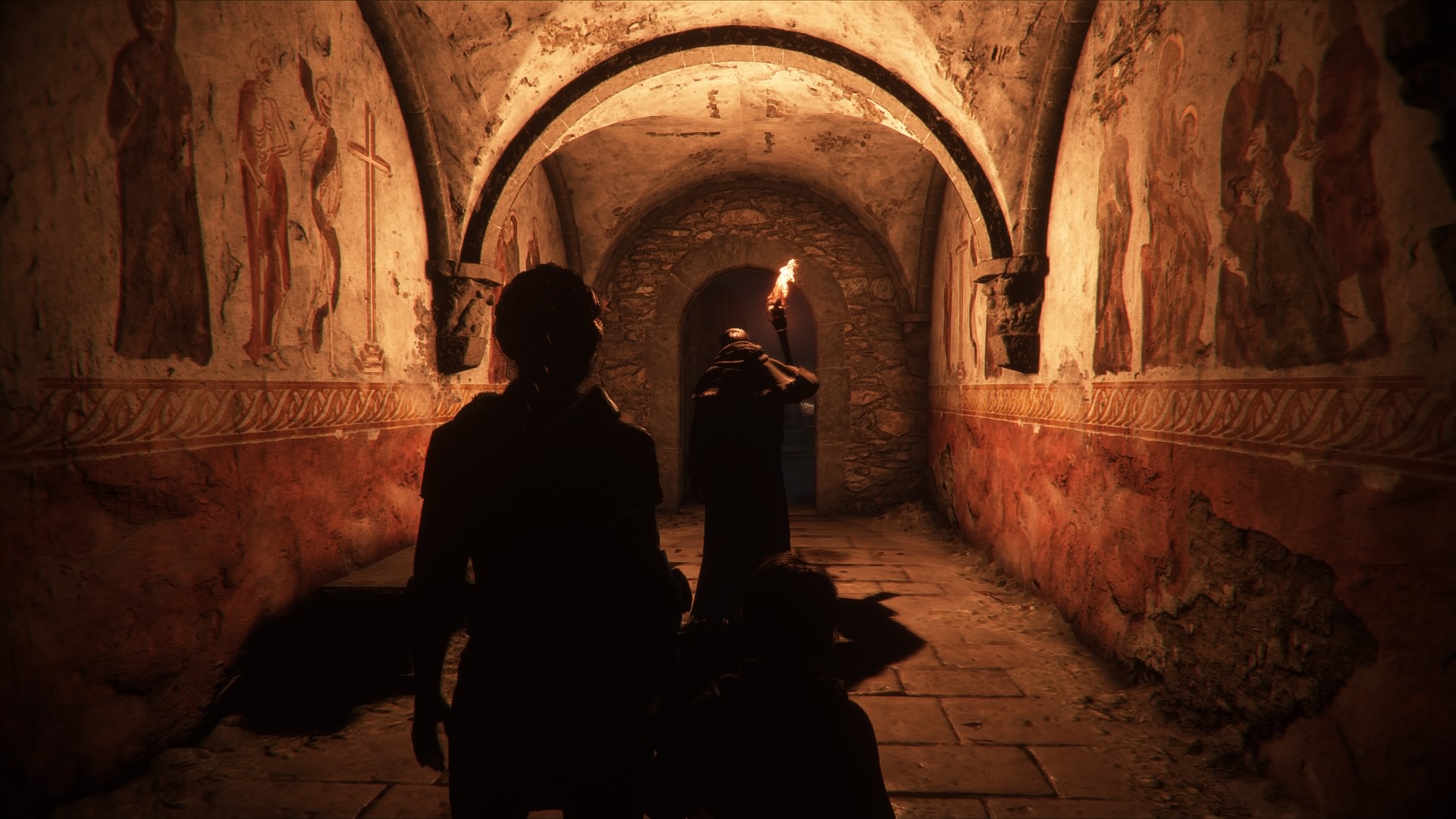 When they returned, they realized inquisitors rushed into the castle looking for Hugo, who poses a threat to them due to his dangerous illness. At this moment, Amicia meets with her brother and a strong sibling bond comes alive, which is hard to be broken. Robert laid down his life for his family, and their mother will protect the daughter and the son from dangerous inquisitors until the final moment.

I got interested in A Plague Tale: Innocence based on authors' interviews and tempting teasers. The story-driven adventures like Last of Us are my favourite genres, so I decided to share my opinion on this game which I bought immediately after its release. Let's share my experience.

Two persons who's grown on me, my heart. You'll probably feel sorry for Amicia, but you'll be worried about Hugo you always want to help him, anywhere. Hugo's disease is not infectious but very rare. During the rush from home, Hugo sometimes feels very sick and have strong headaches, so it's necessary to wait for a while and calm down Hugo. Amicia is so patient and tries to understand Hugo's disease, but sometimes she gets mad of him.

Cooperation between the two siblings is essential. Amicia helps Hugo to overcome insurmountable obstacles, but Hugo may help Amicia with his size, agility and kid's skills.

They have to count on each other on the journey to survive because bloodthirsty, hungry rats appear on the scene and at some moment, you can see more than 5000 of them on the screen. You can dodge them, but most of the time, one sidestep away from the illuminated road may cause you and Hugo die, or other people in the story. 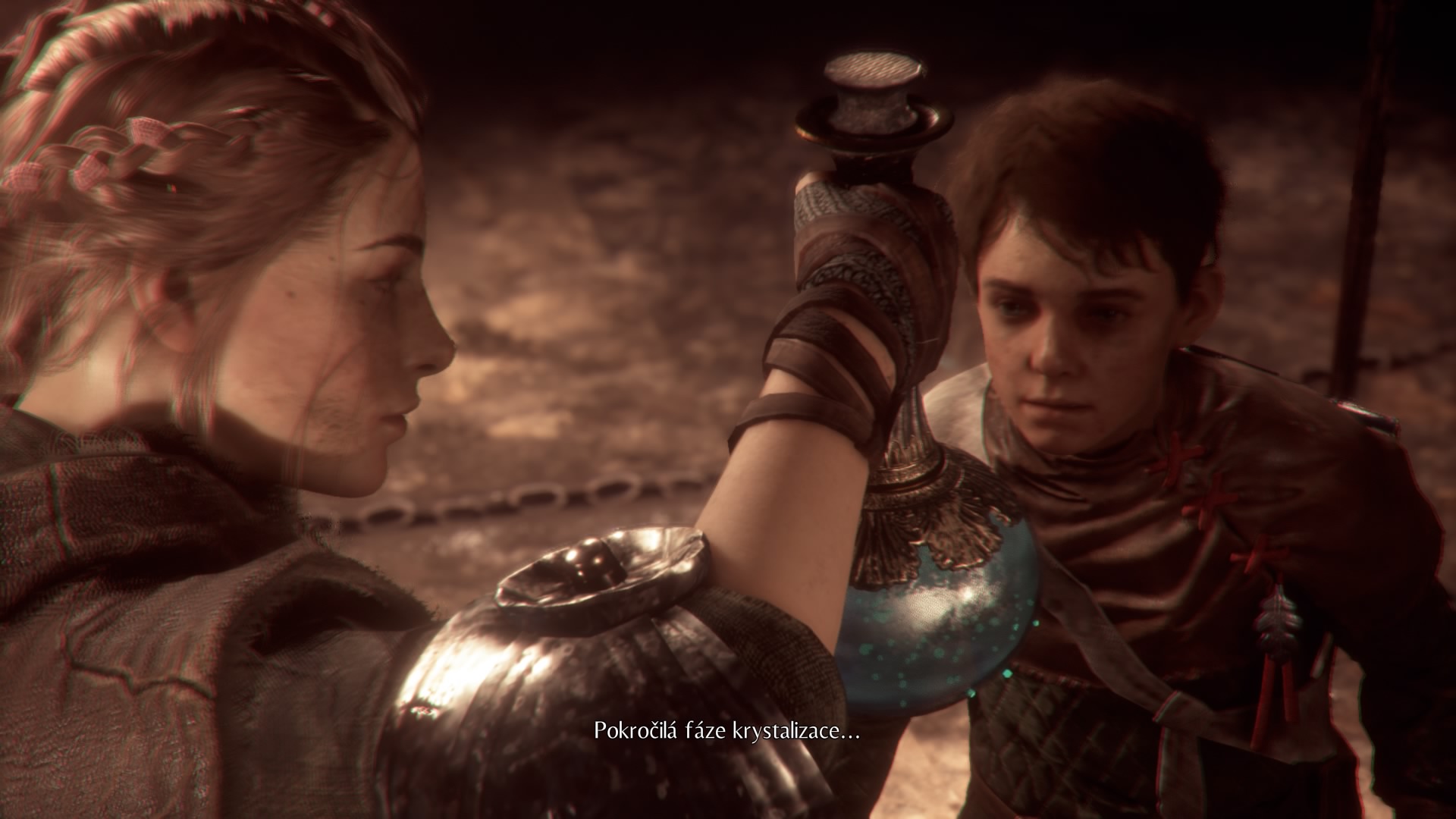 Light equals life. Dark equals death. Even when most of the actions take place in dark places and gloomy environment, rats are not dangerous only for you but even for others and lurks at every corner. Guards still keep a lantern with a candle inside or a lighted torch, because wandering around in dark means death.

Hugo loves when you collect flowers during the adventure. Hugo de Rune is kind of walking herbarium, and he knows a lot about flowers every time he picks a petal from perianth and tucks it into Amicia's ear to she looks pretty.

Beside collecting flowers, there are also toys of orphans and curiosities randomly placed on the map or in the chapters which also belong to collectable items. There are also five alchemistic wagons containing valuable resources which you can use in crafting - different shots with specific impacts, upgrading Amicia's slingshot, her pockets or enhance alchemistic skills.

Amicia's slingshot, that's what this is about. No slingshot, no shot. If the game looks like a stealth action-adventure, sometimes you certainly need to dust down the slingshot and show opponents that you're not a little girl having a toy in the hand. Use a specific show you need. I would not like to reveal any definite effect of shots, but I can tell you that you're getting shots during the progress, and it will be efficient shots, important shots and very important shots. As you say, resources play the first fiddle which you can find whenever across the map. Don't be worried, if you are a beginner in this genre, you should not be afraid of running out of ammo. Actually, resources are almost everywhere, they shine or slightly illuminate for better notice, but the camera view is set very close behind Amicia's back, it can happen that some materials you absolutely miss. As same as collectable items, gifts, alchemistic wagons and interesting places.

Road or no road, you will face different kinds of species of danger. Maybe in time, you'll find out that rats are not the worst you can meet on your journey. Atrocity is omnipresent, and as I mentioned above, the danger lurks at every corner. 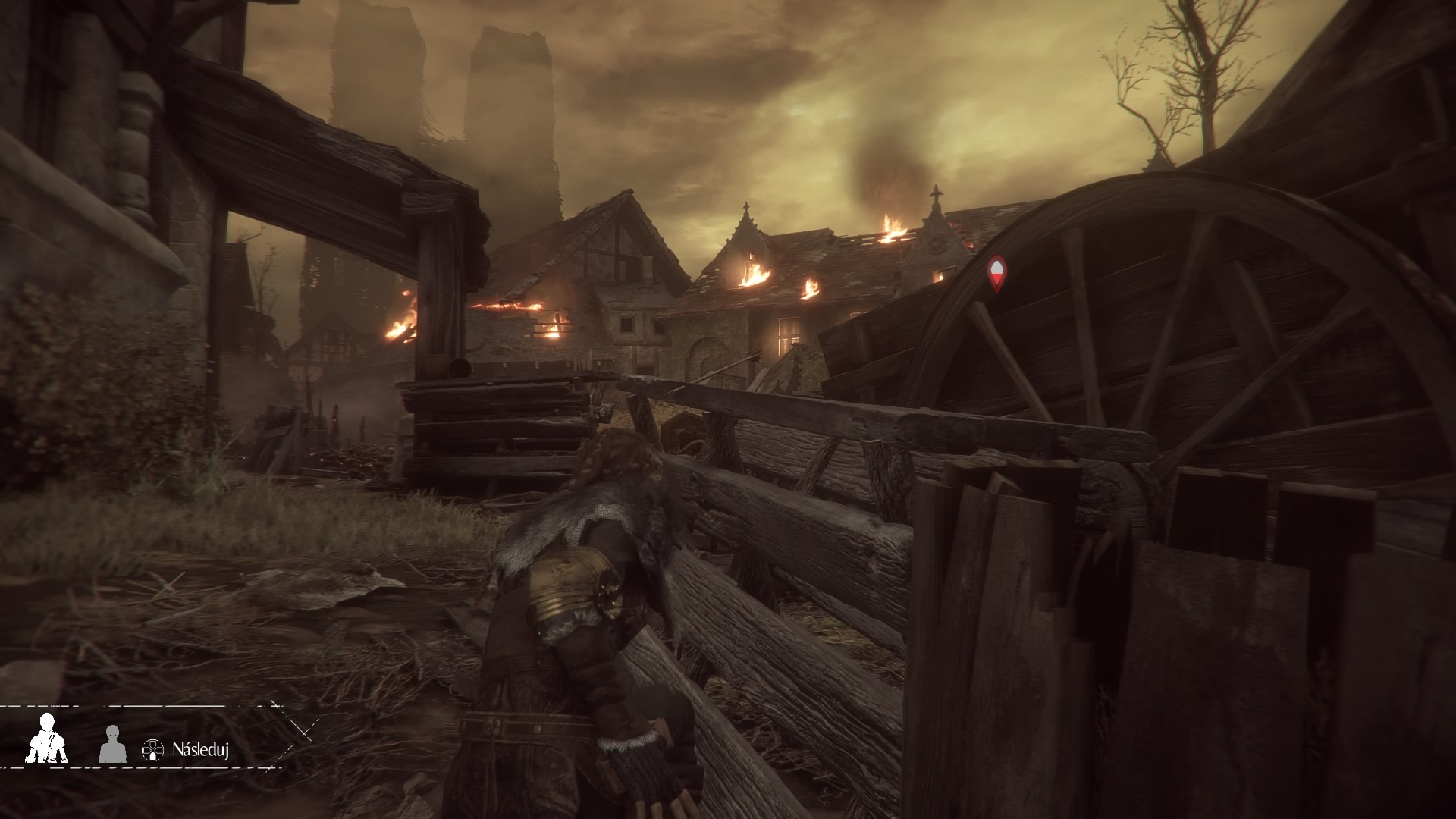 On the way after satisfaction and freedom, your crew becomes broader of other persons who help you several times. Surroundings are designed to look medieval and it looks stunning. Probably, you'll notice lots of imperfections you wave your hand over or you won't like them. It's not AAA title, but in my honest opinion, it slowly approximates similar ranking.

Sometimes you'll have a feel that guards are really foolish because you'll be able to walk side by side and they won't see you. Most of the combats are not challenging to suffer like in Bloodborne. The game is supposedly not designed to stop you at a specific place and not letting you pass. The storyline has its pros above in comparison to the combat system.

I don't want to belittle combat system that it's easy and the game looks ugly. I just want to remark that 50$ game is worth it. I also mentioned above the game is a stealth action-adventure, but in some cases, you realize that you're such a strong fellow that you pull out a slingshot and give the guards hiding.

What I'm having to tell you, the game has an awesome soundtrack. You feel the shivers at some places, in gloomy forests and specific chapters. You can hear drums and violins. The sound is a huge part of the interesting title which deserves positive feedback.

Passing the game should take you up 10 hours when you focus on the storyline, but side quest is collecting flowers or interestingnesses would take you up another 4 hours.

All twelve hours during I was focusing on collecting flowers, gifts and curiosities, I was not bored. Although, I could not completely focus during the entire time on the game and embody into both siblings. Even though I tried to penetrate into mysteries of emotions of both siblings, I didn't make it. I don't think A Plague Tale: Innocence is considerably bad but until the final chapter I could not get into the state I had felt during playing Last of Us or Horizon: Zero Dawn.

Is it a length of the game? It could be fast passages in several chapters, but It might be caused by an unstable connection between chapters, jumping from one action to another and non-challenging opponents.

In the end, I may say that Asobo Studios' title solidly got me, they made it, it has accomplished its goal and my expectations were fulfilled. If you hesitate over buying this title, do not wait too long. Don't get influenced by negative reviews, but hop into running train until it's moving because it'll take you there where you would not have ever thought you can be and you probably will be surprised by the story made by perfect authors. 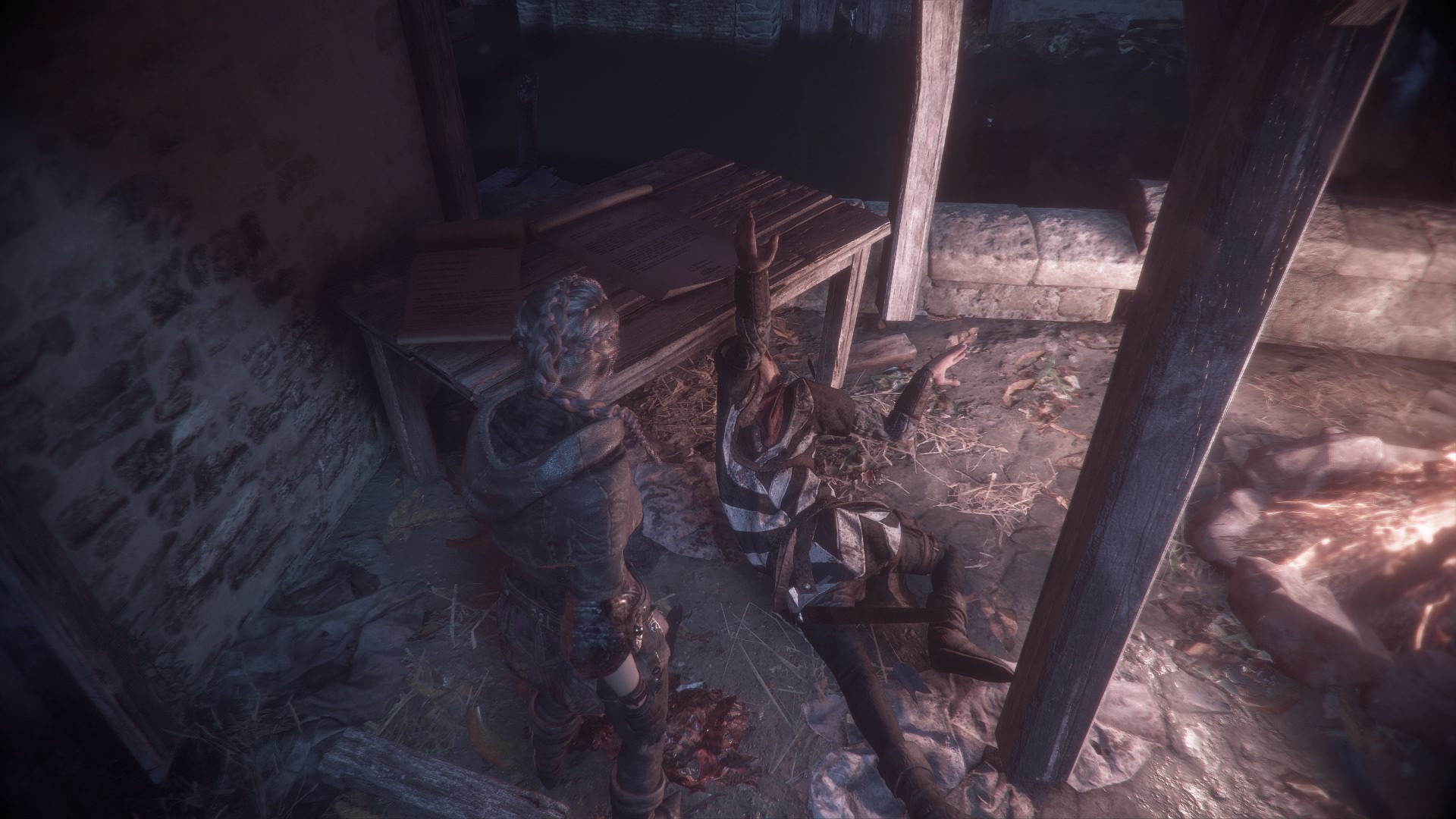 Although the title isn't AAA, Asobo Studio is not too far from it to get this rank. The expectations have been fulfilled; piles of rats attract everyone's eyes of players and siblings relationship come through the entire plot. A sling and variedness of ammunition will do nicely and while wandering across every chapter you won't ever want to "turn on" stealth action instead of shooting everyone. Soundtrack underlines the quality of the game and deservedly takes nearly eight points out of ten.

A Plague Tale: Innocence got the Accolades Trailer

A Plague Tale: Innocence shows itself in a new gameplay

A Plague Tale: Inocence is Gold

What is The Plague Tale: Innocence going to be about?

A Plague Tale: Innocence comes out in half of May