KaM Remake is an attempt to revive the 90‘ old game, which has not said goodbye still. The goal of programmers is to ensure players to play smoothly without crashing and without errors. The game is programmed to run on today's computers and operating systems. In addition, two fans of this game are working to make a multiplayer system work flawlessly. To achieve that goal, programmers have started almost from scratch, which meant writing their own code, but the game is still dependent on some original files. KaM Remake is freeware so you can download it for free.

As I mentioned above, KaM Remake is something new, but it is the same game. The problem was in 2008 that the source code almost did not exist, so it was necessary to start from the bottom. It took 3 years until 2011, the first version of KaM Remake was created. This was the first version that was flawless, but it repaired a lot of mistakes/bugs that were made by the earlier datadisk. The fans goal was/is very simple, resurrect the path to the heart of many real-time strategy players.

As I mentioned above, programmers had to do everything from the scratch. Because the game is based on original files, the graphical interface has not changed much. They changed a little bit game menu, which is now clearer the game offers more than 40 world languages. If I am not mistaken, dubbing is a part of each of the chosen languages. So, your army will always answer you in chosen language.

Another necessary change is the resolution that you can customize to your requirements. Nowadays, the default setting (usually) is 1920x1080, but this is not a prerequisite. Menu controlling is intuitive and comprehensible. If you have a game in Czech, you should not meet any barriers to start to siege enemy’s village. Krom and Lewin also repaired resolution of the whole game. It means that buildings and inhabitants have passed through the adjustment. For that, the two programmers should deserve a great gratitude. 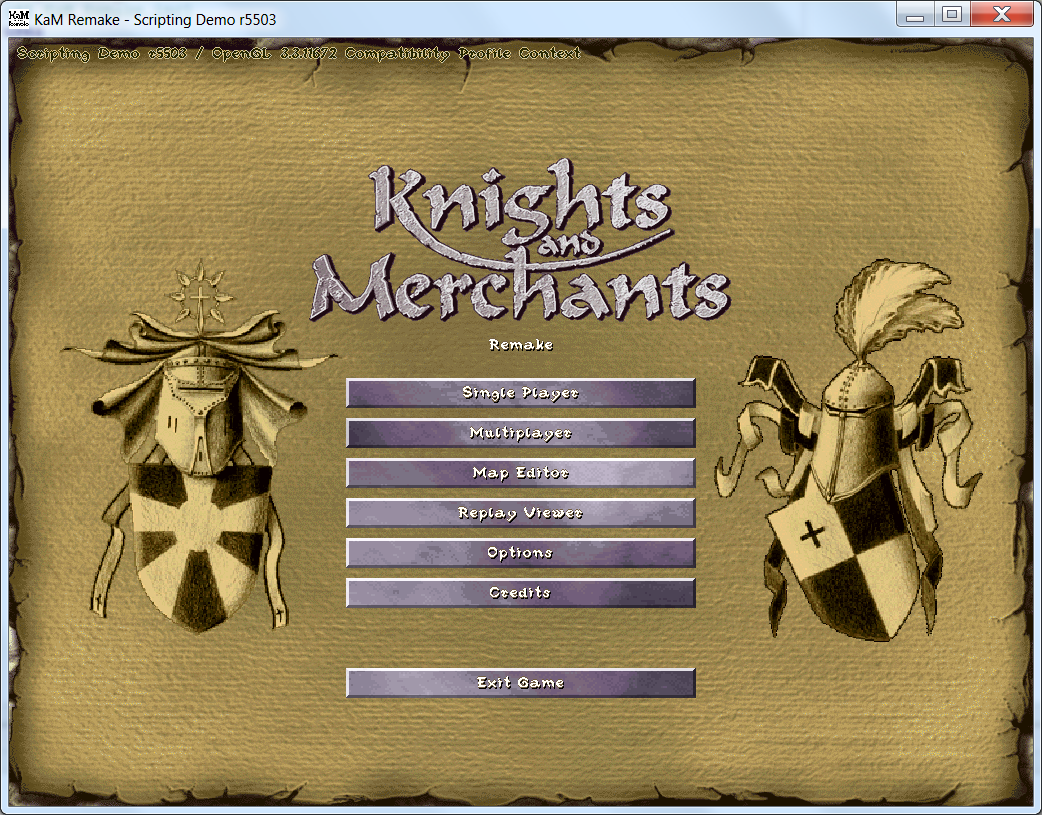 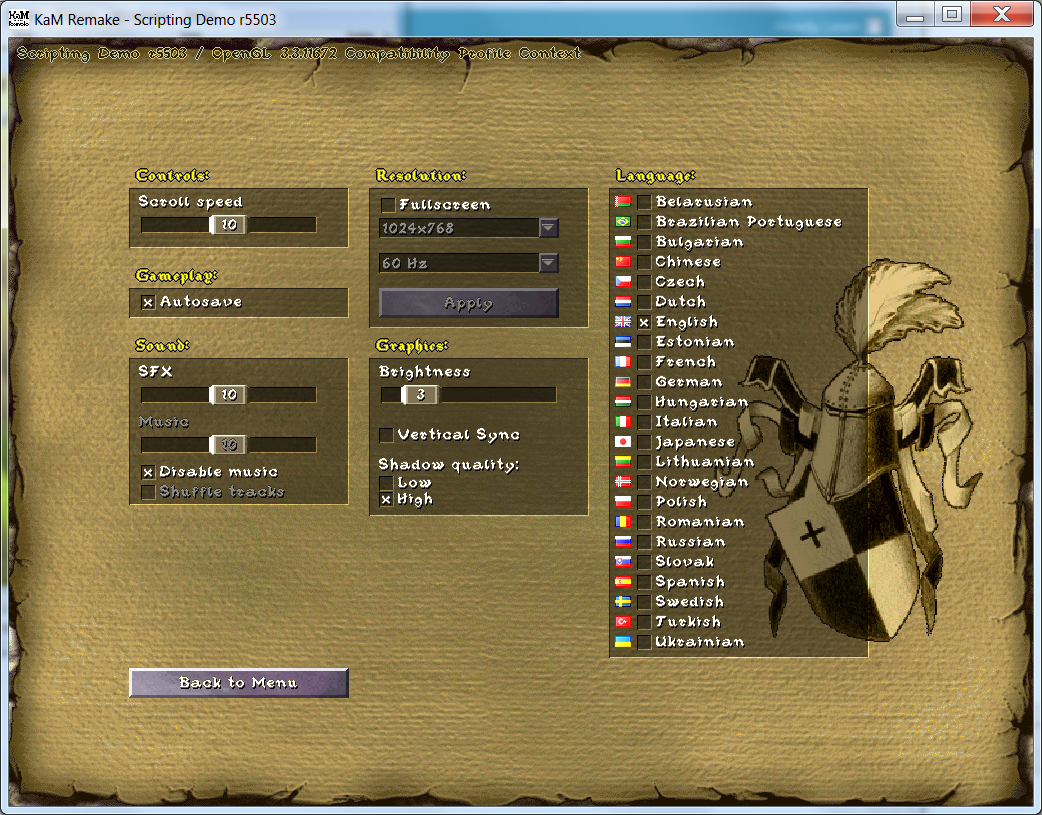 I think that there was a possibility to make your own music playlist with your own music. So, if you were mad of listening medieval music, you could easily drag and drop your music files to the folder where was the original music. This was confirmed with the release of KaM Remake. I prefer chill music so I added some piano and violin compositions to the game. In the final you can think about your strategy together with your own music which you dragged to the folder.

Knights and Merchants and cursed multiplayer. This has been an ever-discussed topic since 1998. It has taken 16 years since the multiplayer has been repaired. It took 16 years to fix multiplayer bugs to be fully operational. Multiplayer has opened the gateway to the KaM world for many players around the world. When I talk about players from all over the world, KaM's biggest fans are Russians, Germans and Poles. Do not let you down if you meet Thais, Finns or Brazilians. They always want to compare their strategy against yours.

Even servers have been created to which almost anyone from around the world can join. The only limitation for players is the response (ping/latency) when connecting from the Czech Republic to a Brazilian server.

Multiplayer offers a nice lobby room. Choose a nickname and you are able to join any waiting room for a game. If you do not like some maps, you can set up your own game on another server and choose the map you like. When you set up the game, you only expect incoming players who sympathize with your chosen map. If you make a deal about changing the map it is up to you to do that. I should not forget an addition that came with KaM Remake, you can accelerate the game using the F3, F5, and F8 keys. Building in original game was slow, so it is now possible to accelerate the game, but only in single player. In multiplayer, you can set three values ​​that affect your game. It is "peace time". If the peace time is set to 60 minutes, you cannot create military units during whole 60 minutes.

Another item is the speed of play during the peace time. This means that the game will run as it is set by default (1x) or you can play the game and set the values to ​​1.5x, 2x, 2.5x, 3x. The last thing is the speed of the game after the peace time. After a time of peace, you manipulate the troops and, at the same time, you need to worry about your village, so it is not appropriate for the value to be set to the highest value.

A very popular setting is 90 minutes of peace time, the game's speed at a time of 2.5x, and after a time of peace set to 2x or 1.5x. Although I consider myself as an advanced player of this game, only a handful of individuals who control this game are masterly in the "PRO" category. So-called professional players play the game for 60 minutes of peace time, 1x and 1x. This setting also has an advantage because you can think through each step precisely. After 60 minutes, you finally go to a battle, and believe it or not, one small tug means your entire army and village will be sacked.

The last mention is perhaps the tremendous fun you will experience during playing multiplayer. Experience the most amazing moments with a bunch of buddies you call over voice-messaging applications and plan your plans together against the Russian duet or the entire Russian national team.

Multiplayer is upgraded to the current version of KaM Remake and you do not have to worry about the game crashing, unexpected bugs or unpleasant mistakes. Every game is an unforgettable experience where you collect experience and try to learn from your mistakes. 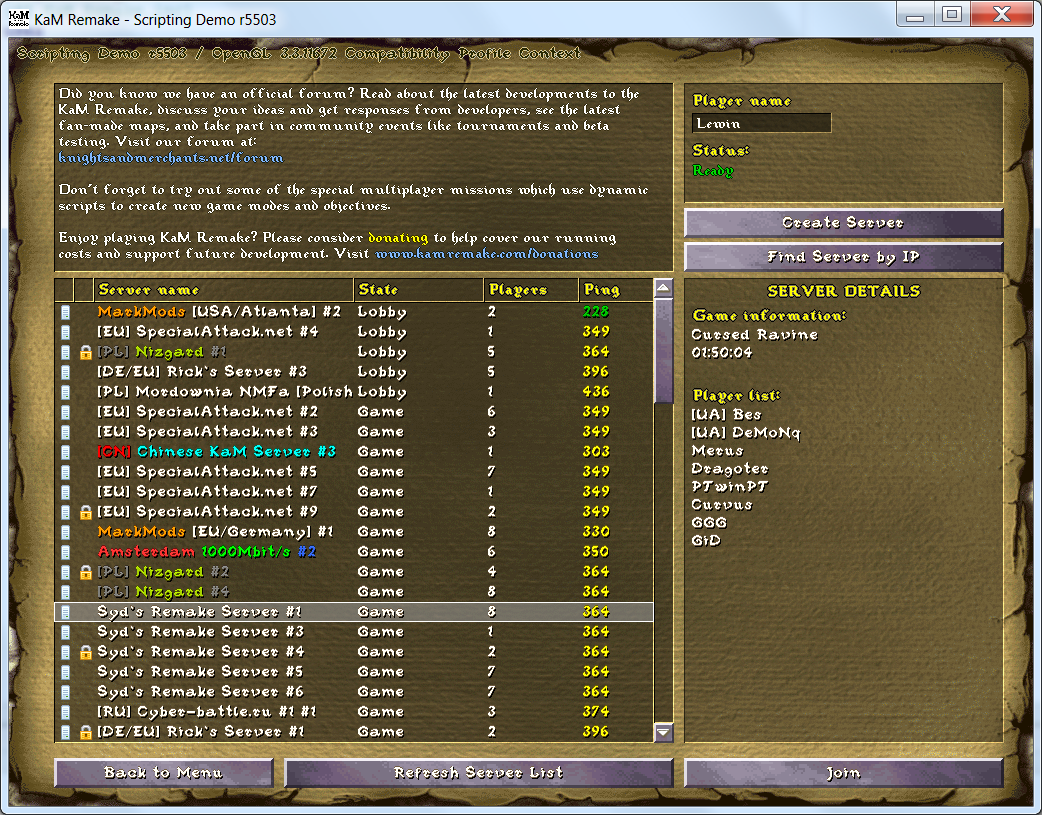 The Map Editor has been finally edited into a form where it is easy to manipulate objects, edit terrain, and set all the parameters needed to create a new map. I personally know that someone is publishing new maps which are very special and thoughtful. I can only point to the trend of scripting maps, which is a great entertainment for some sort of people. It's a map that's set to keep you entertained. It's mostly a map where you just click on some buildings and generate soldiers automatically. These maps are mainly made for fun, that does not require any knowledge. With each such map, there are also instructions on how the map is played and what the target is in it. Whether you know the Warcraft III game and the DotA map, DotA is not a game but just a well-made script map. Scripted maps in Knights and Merchants work like that. 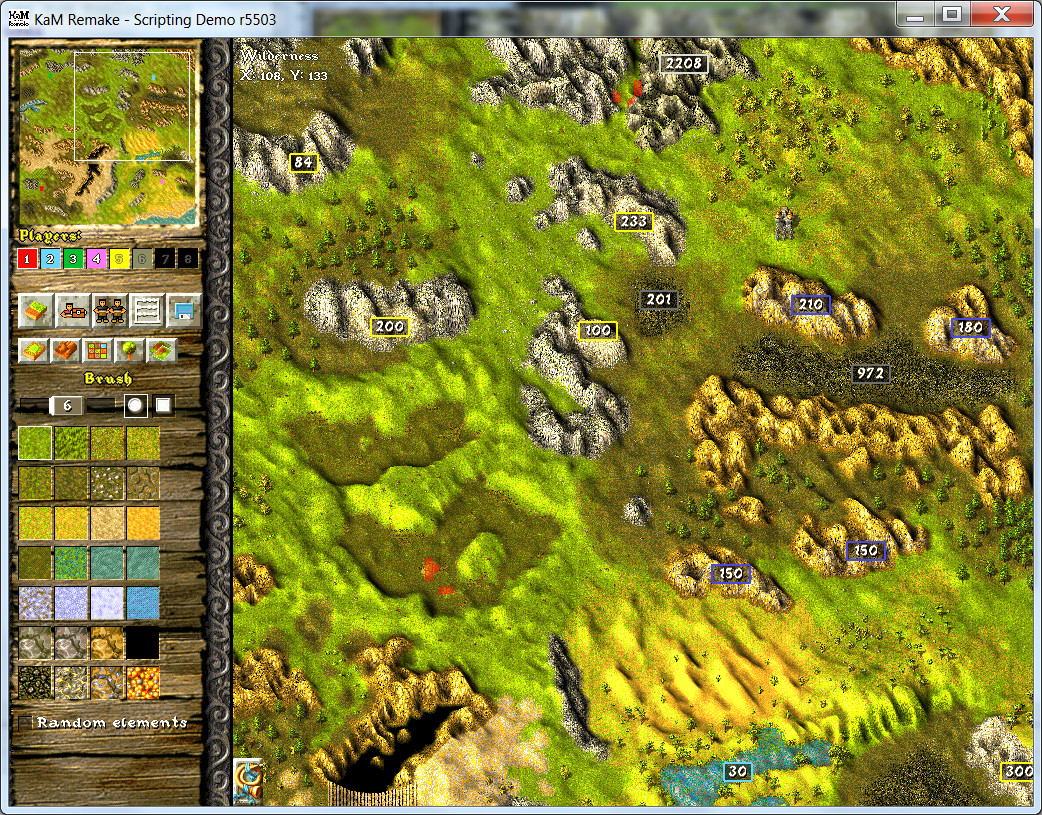 What we can miss in KaM Remake

Who would have said that in 2017 we will play the game made in 1998. Of course there are timeless games such as Age of Empires or Heroes III, which have also undergone adjustments at least within the resolution. I think that you should know Knights and Merchants and give this game a chance. If you buy an original game with a DLC, I strongly recommend you to download KaM Remake and replace the original game with this fancy remake. 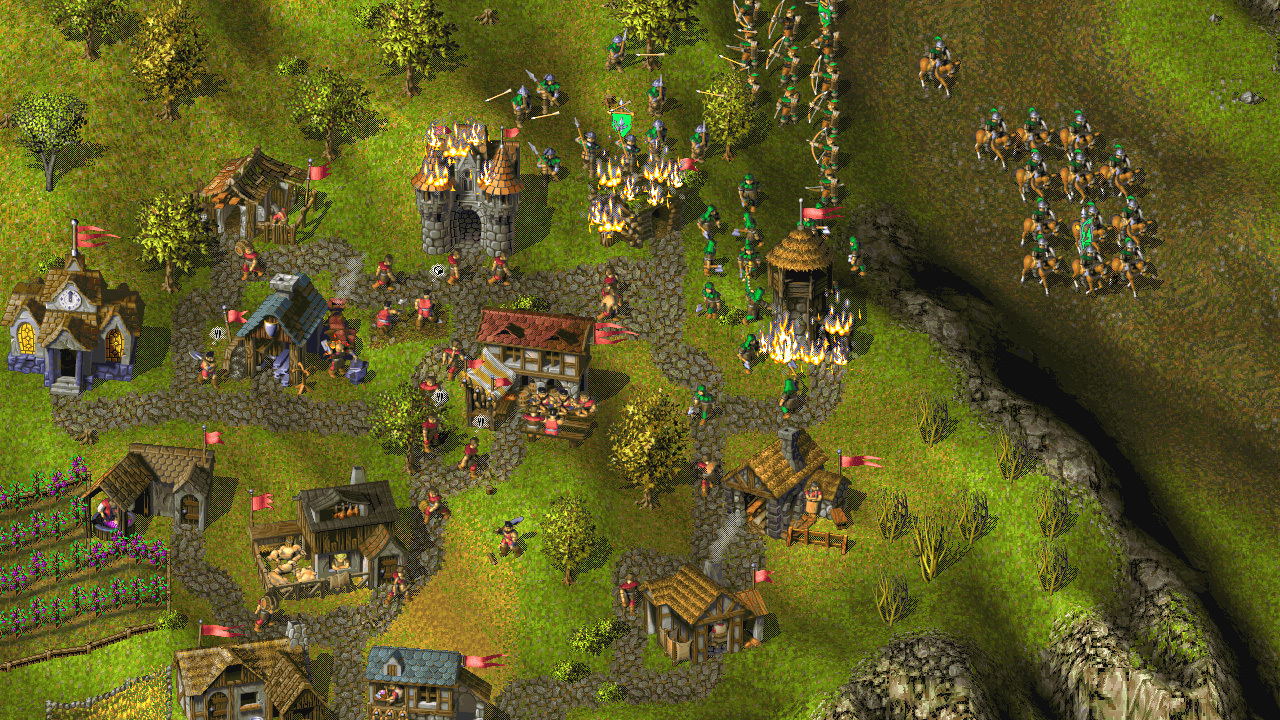 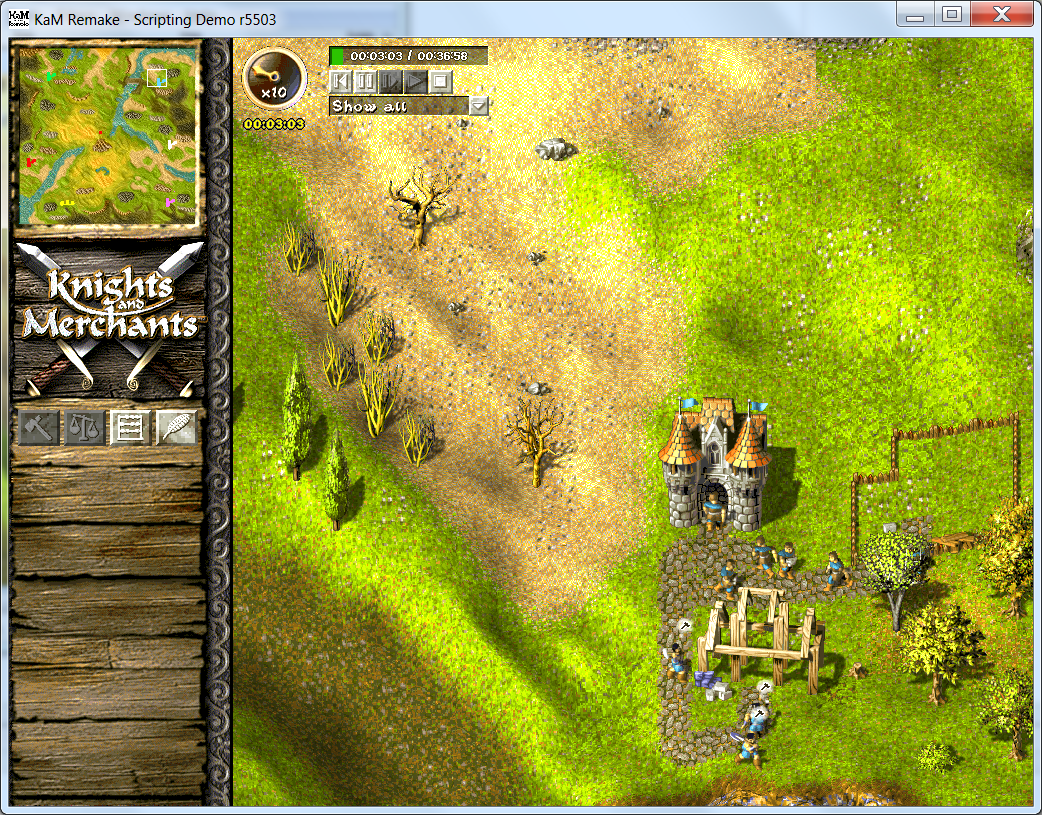 Such a long time, many bugs fixed and the desire to remake the old game to make it almost unrecognizable. And this is Knights and Merchants Remake. Two programmers who have done a great job, and in their free time, have led the work to perfection.